A Time To Kill – John Grisham 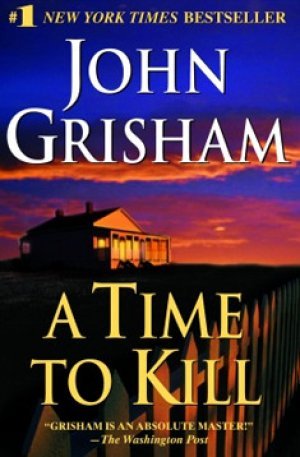 Clanton, Mississippi. The life of a ten-year-old girl is shattered by two drunken and remorseless young men. The mostly white town reacts with shock and horror at the inhuman crime. Until her black father acquires an assault rifle and takes justice into his own outraged hands.

For ten days, as burning crosses and the crack of sniper fire spread throughout the streets of Clanton, the nation sits spellbound as young defense attorney Jake Brigance struggles to save his client’s life… and then his own….

The movie was better. That’s the short version. The long version is that I’ve finally decided that I don’t particularly care for John Grisham’s work, and if you give me a minute I’ll tell you why.

For starters, there is a whole lot of could-have-been going on with this book. It could have been a taut, intense legal thriller. The characters could have been lovable, or even likable. The social commentary could have been insightful. Here’s the problem, though. The legal aspect sprawls with boring details and leaves little room for action. Most of the characters are too focused on the publicity surrounding Carl Lee Hailey’s trial than the trial itself, or the crime that made it necessary to put Hailey on trial in the first place. The social commentary is delivered on a soap box about corporate lawyers versus street lawyers, blacks versus whites, fathers seeking revenge versus the law delivering justice…some of the time. The strongest message I got was of jury manipulation and intimidation. If you put enough pressure on them, you’ll get whatever verdict you want, thus completely undermining the entire concept of justice.

I could have let all of this slide, if it wasn’t for Grisham’s style, or in this case, lack thereof. It was bland and did absolutely nothing to engage my emotions. I had nothing vested in the story but the time I was willing to spend reading it. I just had no reason to care, which has been the case with every John Grisham novel I’ve read. He doesn’t push my buttons or do anything to get me involved, and by the time I’m finished I’m just glad it’s all over, for my own sake. I couldn’t care less about the characters and their struggles. I really wanted to enjoy this book, but I think I’ll stick with the movie from now on.

Hello! Glad to meet you! Long story short, I've got a young heart with an old soul, I love to think about stuff, and occasionally share what I think about. Stick around, if you like!
View all posts by RisingPhoenix761 →
This entry was posted in drama, legal drama and tagged could have been, disappointing, personal collection, wouldnt read again. Bookmark the permalink.