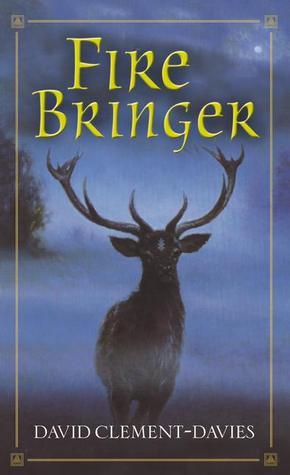 Young buck Rannoch was born on the night his father was murdered and into a herd of deer where hunger for power has gradually whittled away at all that is true and good. He knows he must escape to survive. Chased by stags, with their fearsome antlers sharpened for the kill, he begins a treacherous journey into the unknown, and ahead of him lies a shocking and formidable search for truth and goodwill in the shadow of the Great Mountain.

One day he will have to return to his home and face his destiny among the deer to fulfill the prophecy that has persistently given them hope: that one day a fawn will be born with the mark of an oak leaf on his forehead and that fawn’s courage will lead all the deer to freedom. Filled with passion and a darkness that gradually, through Rannoch’s courage in the face of adversity, lifts to reveal an overwhelming feeling of light, Fire Bringer is a tremendous, spirited story that takes the reader deep into the hearts and minds of its characters as they fight for their right to live in peace.

Well-written and brimming with a gutsy excitement that leaps off the page and straight into the imagination, David Clement-Davies’s debut novel for young readers is an exceptional, dynamic, complex, and utterly absorbing piece of work that anyone with a true love of animals and adventure will find impossible to put down.

I first read this when I was twelve years old, and x-amount of years later, it still resonates with me. There’s the old nostalgia of returning to a childhood favorite, of course, and the deeper appreciation of a more seasoned reader.

Before this, his debut novel, David Clement-Davies was a travel writer, something that shows in his style. It’s vivid and descriptive, and it’s safe to say it paints entire pictures with words, the attention to setting and scenery is so acute. Yet it lacks the flow of a practiced fiction writer, a fact most obvious in choppy sentences and stiff dialogue. The characters are often one-dimensional, the plot predictable, and the themes well-worn and familiar.

None of this is to say the author isn’t a good storyteller, as it’s really quite the contrary. It’s standard epic fantasy with all the classic tropes and clichés, but its execution is gripping and exciting. The climax is suitably stirring, and the final scene always haunts and lingers, even after all these years. It’s the book that introduced me to one of my favorite fantasy authors, and the fact that I can still appreciate it beyond childhood nostalgia says a lot for it. I would readily recommend it to any fantasy reader, and advise them to bring tissues. They might come in handy later.

Hello! Glad to meet you! Long story short, I've got a young heart with an old soul, I love to think about stuff, and occasionally share what I think about. Stick around, if you like!
View all posts by RisingPhoenix761 →
This entry was posted in adventure, childrens, fantasy and tagged animals, david clement davies, i cried, old favorites, personal collection, scotland, simply speechless. Bookmark the permalink.