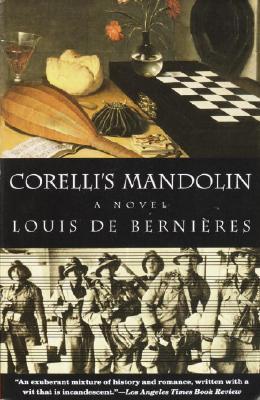 Captain Corelli’s Mandolin is set in the early days of the second world war, before Benito Mussolini invaded Greece. Dr Iannis practices medicine on the island of Cephalonia, accompanied by his daughter, Pelagia, to whom he imparts much of his healing art. Even when the Italians do invade, life isn’t so bad–at first anyway. The officer in command of the Italian garrison is the cultured Captain Antonio Corelli, who responds to a Nazi greeting of “Heil Hitler” with his own “Heil Puccini”, and whose most precious possession is his mandolin. It isn’t long before Corelli and Pelagia are involved in a heated affair–despite her engagement to a young fisherman, Mandras, who has gone off to join Greek partisans. Love is complicated enough in wartime, even when the lovers are on the same side. And for Corelli and Pelagia, it becomes increasingly difficult to negotiate the minefield of allegiances, both personal and political, as all around them atrocities mount, former friends become enemies and the ugliness of war infects everyone it touches.

British author Louis de Bernières is well known for his forays into magical realism in such novels as The War of Don Emmanuel’s Nether Parts, Señor Vivo and the Coca Lord and The Troublesome Offspring of Cardinal Guzman. Here he keeps it to a minimum, though certainly the secondary characters with whom he populates his island–the drunken priest, the strongman, the fisherman who swims with dolphins–would be at home in any of his wildly imaginative Latin American fictions. Instead, de Bernières seems interested in dissecting the nature of history as he tells his ever-darkening tale from many different perspectives. Captain Corelli’s Mandolin works on many levels, as a love story, a war story and a deconstruction of just what determines the facts that make it into the history books.

First things first: This is without a shadow of a shadow of a doubt one of the best books I have ever read. I generally hesitate to use the word masterpiece, but I don’t know what else to call this. The scope of the work, the detail, the writing itself…this is ART! I had to savor it, reading entire paragraphs over and over again and saying a few of them aloud because the words fit together so beautifully on the page I had to hear them on the air as well. I was really impressed it always managed to be two things at once: high brow and down to earth, refined and coarse, funny and serious, tragic and romantic. Mr. de Bernieres takes all the great topics of great literature and gives them a rendering that drives them home. It’s pretty amazing.

And so lively! There’s always something going on, which sounds obvious, but what I mean is that everything, down to the most mundane occurrence, is treated with such vigor and to-do that it seems like the most important thing that ever happened. It’s hard to have a one-sided conversation about the characters, they’re all so eccentric and quirky. They all start off well-developed, too. The only ones that had to grow were Pelagia and Mandras, by virtue of their beginning as teenagers and maturing along the course of the story. In particular, I love how the characters get along with each other, Pelagia and Iannis, Stamatis and Kokolios, Carlo and Velisarios, Corelli and everyone else, and my favorite, Iannis and the goat.

If I have one complaint, it’s that the apparent lack of focus at the beginning makes it easy to walk away, but I can tell you that would be a mistake. What follows is something special. I think anyone who can read this, should. In terms of ranks, I think it stands somewhere between Les Miserables and Hamlet…you know, the giants of literature. I’ve rarely been so amazed by the written word, and never so humbled as I was reading this, and that’s saying something.

Hello! Glad to meet you! Long story short, I've got a young heart with an old soul, I love to think about stuff, and occasionally share what I think about. Stick around, if you like!
View all posts by RisingPhoenix761 →
This entry was posted in drama, historical fiction, romance and tagged attack of the feels, book bingo, favorites, free bin, i cried, never saw it coming, personal collection, simply speechless. Bookmark the permalink.