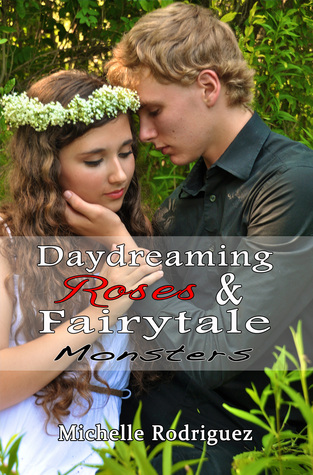 Channing is a vampire who has spent his immortal existence on a mission. He’s never had time for the pleasures of living or to mourn his lost mortality until one fated night when he crosses the path of an innocent mortal girl and falls hopelessly in love. Rose has lived her life sheltered from the rest of the world. With no one but her beloved sisters as allies, she spends her days half lost in fairytales, creating stories of the world she has yet to know and believing in a true love she is destined to feel. When Rose becomes the object of Channing’s heart and obsession, dreams of fairytales become nightmares of monsters. In a love story as dark as it is destined, Channing seeks to prove to Rose that love defines the heart of a monster and can transform any beast into a man.

Rose Abbott may be my favorite of Michelle’s heroines so far. I identified with her so well and so quickly she couldn’t help but shoot to the top of the list. Living in a dream world, always full of stories with some too close to her heart to share lightly, determined not to settle when it comes to love, “beautiful and brilliant,” and definitely not a damsel in distress. Then on the other end of the spectrum, we have Channing, the eighty-something vampire who, to all appearances, doesn’t look a day over twenty-two. Channing is deadlocked in reality and on a mission for vengeance that has spanned over sixty years. You could say his personality is prone to obsession, and you would only be more convinced once he set eyes on Rose.

Beautiful language, humor, conflict within and without, and true love; this has everything I’ve come to expect from Ms. Rodriguez, and lest you get too comfortable, she threw in a few curve balls. Misuse of supernatural powers, a hero behaving like a villain in many different ways, the vampire equivalent of drug use, and what I feel is Michelle’s creepiest baddie to date. It’s just as dark as Opera Macabre, her previous vampire novel, but it’s balanced with Channing’s wise-guy sidekick Schuyler and Rose’s two sisters, Millicent and Prudence. The interaction and the bond between the sisters really made the story for me, especially in light of the book’s dedication, and it felt much more personal and (if possible) more heartfelt because of that.

Michelle has told her fans this has a Phantom of the Opera flavor, and I can see that element in play, but I thought of it most as “Beauty and the Beast.” Through a terrible curse, an ordinary man becomes a monster, and the key to breaking that curse is through the love of a woman who sees beyond the monster. Rose’s story of the rose and the weed was one that will stay with me for a long time, and her tales of the Dark Man in her dreams were the best part of all.

All in all, another great story and one that’s earned a place of honor on my bookshelves. And now, I leave you with a few of my favorite quotes!

– Perhaps I’ve believed in fairy tales too long, but I want someone who would adore me in a way that alters every bit of my world. I will not settle for plain love when I want explosions of firelight.

– Do you believe in shadows? Shadows with hands that come out of the night and can steal you away if you wish hard enough?

– Yes, he was her nightmare, and she was his dream, and that made them as far from each other as possible.

– I’ve always been a little in love with a character in my head, and not a single one of those ridiculous gentlemen could live up to my fantasy.

– She doesn’t look like the violent sort, but the deadliest ones never do.

– You know what monsters lurk in the dark, and yet you embrace it anyway.

Hello! Glad to meet you! Long story short, I've got a young heart with an old soul, I love to think about stuff, and occasionally share what I think about. Stick around, if you like!
View all posts by RisingPhoenix761 →
This entry was posted in romance and tagged attack of the feels, book bingo, favorites, jessica elizabeth schwartz, michelle gliottoni rodriguez, personal collection, vampires. Bookmark the permalink.