Child of the Prophecy – Juliet Marillier 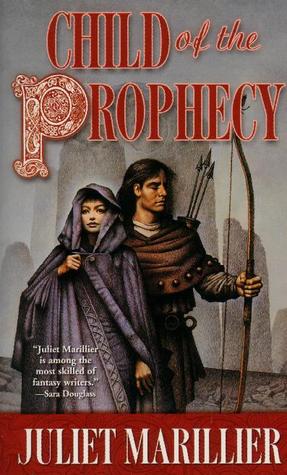 Magic is fading… and the ways of Man are driving the Old Ones to the West, beyond the ken of humankind. The ancient groves are being destroyed, and if nothing is done, Ireland will lose its essential mystic core.

The prophecies of long ago have foretold a way to prevent this horror, and it is the Sevenwaters clan that the Spirits of Eire look to for salvation. They are a family bound into the lifeblood of the land, and their promise to preserve the magic has been the cause of great joy to them… as well as great sorrow.

It is up to Fianne, daughter of Niamh, the lost sister of Sevenwaters, to solve the riddles of power. She is the shy child of a reclusive sorcerer, and her way is hard, for her father is the son of the wicked sorceress Oonagh, who has emerged from the shadows and seeks to destroy all that Sevenwaters has striven for. Oonagh will use her granddaughter Fianne most cruelly to accomplish her ends, and stops at nothing to see her will done.

Will Fianne be strong enough to battle this evil and save those she has come to love?

Oh boy. Oh my stars and garters. It’s rare that a series concludes as strong as it starts, but Juliet Marillier pulled. It. Off. Child of the Prophecy was everything I anticipated, and nothing like I expected.

Fainne, daughter of Niamh and Ciaran (yes! There’s more to their story!) is intelligent and independent, yet an unwilling pawn in the sorceress Oonagh’s final plot to destroy Sevenwaters and the Fair Folk. She was just as strong a lead as Sorcha and Liadan, but a good deal more nerve-wracking. If I spent Daughter of the Forest in a fit of tears, then I spent this one weaving baskets and scared to death Fainne was making all the wrong choices. I have never been so concerned for a protagonist before!

I think this might be my favorite supporting cast of the series, with Sean’s daughters, Liadan’s sons, the Fomhoire, and Darragh. Ah, Darragh…I’m ranking Ms. Marillier with Michelle Rodriguez when it comes to creating male characters I can’t help but fall in love with. And holy crap, what a villain! Oonagh was bad enough when she was in the background, but as the main antagonist she was awful! Eammon of Glencarnagh was, if possible, even more unpleasant than ever, but he’s one of those bad guys you just love to hate, so it’s all good.

I still can’t get over the magic and majesty of Ms. Marillier’s prose. She’s one of those fantasy writers who understands that the words themselves must cast a spell, and you can see it in her work. More importantly, you can feel it, subtle yet irresistible. Not many authors can do that, but the few who can do it well. I was torn between admiration and envy the entire time I read, thinking to myself that I could write a million words a day for the rest of my life, and I will never be this good. It’s just…wow.

This has been the best series I’ve read all year, and it’s definitely one of the best I’ve ever read, period. My only regret is that I got the books out of the library and couldn’t keep them all to myself!

Hello! Glad to meet you! Long story short, I've got a young heart with an old soul, I love to think about stuff, and occasionally share what I think about. Stick around, if you like!
View all posts by RisingPhoenix761 →
This entry was posted in adventure, fantasy and tagged attack of the feels, book bingo, i cried, juliet marillier, never saw it coming, sevenwaters, simply speechless. Bookmark the permalink.