And Angels Will Fall – Michelle Rodriguez 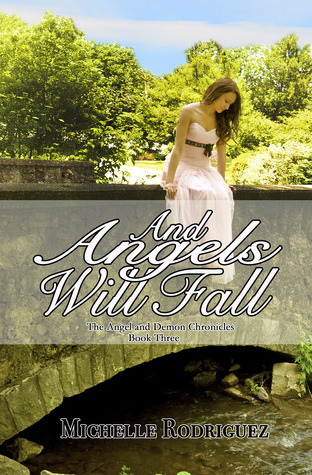 Gillian is marked for hell. She has spent her lifetime fighting the devil’s temptation, but his power is getting stronger. She fears it will only be a matter of time until she falls to her inevitable destiny, …but an angel wants to save her soul.

Sebastian once gave up his place in heaven to save mankind. Desperate to avoid damnation, he spent centuries buried away in a cabin, terrified of the day temptation would arrive on his doorstep. Now it has come in the form of a girl marked for hell but meant for him. Saving her may be Sebastian’s final fall to condemnation, but giving her up would leave his heart to suffer eternally. Can he defeat the devil for Gillian’s soul, or will angels fall?

This installment is certainly the darkest of the series so far, and yet still so much light shines through. Michelle, you wonderful person, you, how do you do it?

I noticed right away how this one parallels The Devil’s Galley, but it also takes a different trajectory. Sebastian, an angel fallen by choice and still not condemned to hell, was out to save the world from itself. Gillian Galloway, tempted by the voice of the devil, is also out to save the world…from her. The story progresses much faster than its predecessors, but as we’re on the third book of the series it’s not necessary to spend so much time laying out the groundwork. The reader can get right to the action. And as previously stated, that action includes some heavy subject matter. Let’s just say Lucifer is definitely not one to play nice.

What better way to dispel the tension than with a wise-cracking sidekick, and aren’t we the lucky ones? There are two! I think everyone needs a best friend like Felix, who more than lives up to his name (it means happy, if you were curious). He was funny and loyal, and goodness gracious, did he care about Gillian! He was my favorite…well, he tied with Topher, the young angel always trying to meddle in Sebastian’s favor. He was always eavesdropping, showing up unannounced, and all but telling Sebastian and Gillian what they needed to know. He reminded me of Foster and Julian from the second book, but maybe a little less rebellious. Gillian’s little sister Heloise got off to a rocky start with me, but I changed my mind when she changed her tune and she turned out to be a sweetheart.

Can’t leave here without saying anything about Lucifer. He was bad enough in book one, but he was even worse this time around. Seductive and scary in turns, which is just the kind of villain I like best, able to pull you in and repulse you at the same time. He just took the number one slot as Michelle’s creepiest bad guy, as far as I’m concerned. Eek!

To wrap this up, it’s every bit as good as its companions. Plenty of romance, passion, humor and conflict, with more beautiful flight scenes and glowing angels. I love it when they glow! Another lovely addition to the series, and I’m willing to bet money the next book lives up to its fellows.

Hello! Glad to meet you! Long story short, I've got a young heart with an old soul, I love to think about stuff, and occasionally share what I think about. Stick around, if you like!
View all posts by RisingPhoenix761 →
This entry was posted in romance and tagged and angels will fall, angel and demon chronicles, angels and demons event, attack of the feels, book bingo, i cried, michelle gliottoni rodriguez, personal collection. Bookmark the permalink.