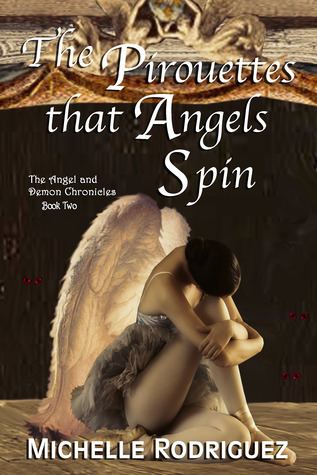 Ashland, a Heavenly angel, loves Poe… Secrets from Poe’s past rip them apart and Poe is forced to Earth to live among mortals. Dancing becomes her new life, but it isn’t enough. Carrying secrets and facing unbearable choices, Poe takes her own life. Devastated and grieving, Ashland travels back through time to be with Poe once more. Will he survive on Earth and can he save the woman he loves?

This is a story of first love, and the entire book has the sweet, playful vibe of young romance (with a little bit of everlasting love to up the ante). I barely stopped smiling the entire time I read it, and that’s no joke.

In The Devil’s Galley, Ms. Rodriguez created an eerie, Inferno-esque picture of Hell, but in Pirouettes we get a Heaven that really does seem like paradise. Complete with angel bars! Yet it contrasts strongly with our hero Ashland’s yearning for his true love, and it contrasts with good effect. What could better demonstrate his love for her than to show how even Heaven was unbearable without her? His devotion to her and his sense of humor won me over fast (not to mention a heartfelt, drunk-as-a-skunk solo performance in the aforementioned bar), and I developed quite the crush on him, to be honest. He had the boy next door charm about him, and while he might be an angel, he is no insufferable choir boy.

As for Poe herself, it hurt bad enough to see her alone and despairing on Earth, much less without Ash’s memories of how wild and happy she was in Heaven. Poor girl! If I could change just one thing just a tiny bit (gasp!) I would want to know more of the old Poe. There were so many memories of her spirited ways, and that was rare enough when she was a mortal. But don’t let me steer you wrong, she had no problem giving Ash the what-for when he screwed up, and she fit right in with Foster and Julian.

Foster and Julian! I LOVED them! Man, I wish I had friends like that, who stir up all kinds of crazy trouble and still have your back when you’re going through hell (in some cases, literally). It’s hard to say who I grew more attached to, Foster because of his humor and his roguish attitude, or Jules because he was shy and sweet but still had a rebellious streak running through him.

I was genuinely surprised at the ending, wondering how it could possibly end well (I mean it! I was worried!), but as with The Devil’s Galley the solution was so simple I really didn’t see it coming. As Sherlock Holmes said, there is nothing more elusive than an obvious fact, and it made a perfect ending to a book I thoroughly enjoyed reading. I can’t wait for the next in the series!

Hello! Glad to meet you! Long story short, I've got a young heart with an old soul, I love to think about stuff, and occasionally share what I think about. Stick around, if you like!
View all posts by RisingPhoenix761 →
This entry was posted in romance and tagged angel and demon chronicles, angels and demons event, attack of the feels, couldn't stop smiling, michelle gliottoni rodriguez, the pirouettes that angels spin. Bookmark the permalink.