The Cat Who Had 60 Whiskers – Lilian Jackson Braun

The Cat Who, twenty-nine 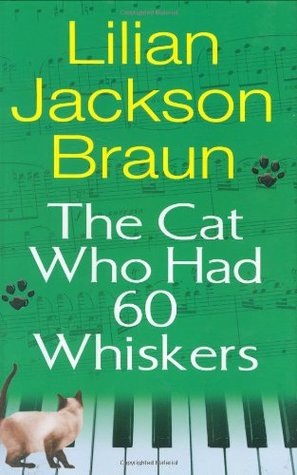 After dropping a bombshell that was a bestseller, Lilian Jackson Braun brings back James Qwilleran and his famous felines, Koko and Yum Yum, for the twenty-ninth installment of the beloved, bestselling Cat Who . . . series.

Moose County, 400 miles north of everywhere, is in an uproar (good and bad) following vast inheritances from wealthy old families. Only “Cool Koko” knows what’s happening . . . and he’s not telling. Jim Qwilleran thinks it’s because he has more whiskers than ordinary cats, but who’s counting?

Meanwhile . . .
Koko meets a piano tuner.
Polly goes to Paris.
Qwill writes a play (an absurdist play titled The Cat Who Got Elected Dog Catcher).
And there’s a mysterious death from a bee sting . . .

It hurts just seeing that rating…but I’ll be honest, I was disappointed. I couldn’t even call this one charming. There was just…too much, and yet not enough. Qwilleran had too many committments in Moose County, and the story itself didn’t commit to anything. Everything mentioned in the blurb is only mentioned in the book and none of it ever goes anywhere. Even the mysterious death by bee sting didn’t happen until the last fifty pages, and the mystery behind it was cleared up a little too simply and with too much unresolved. I feel like I’m only complaining here, but I only finished this one because I had absolutely nothing else to do, so that says enough for me. I’ll make it quick: if you’re reading The Cat Who, feel free to skip this installment.

Hello! Glad to meet you! Long story short, I've got a young heart with an old soul, I love to think about stuff, and occasionally share what I think about. Stick around, if you like!
View all posts by RisingPhoenix761 →
This entry was posted in mystery and tagged animals, book bingo, could have been, the cat who. Bookmark the permalink.