The Angel and Demon Chronicles, book one 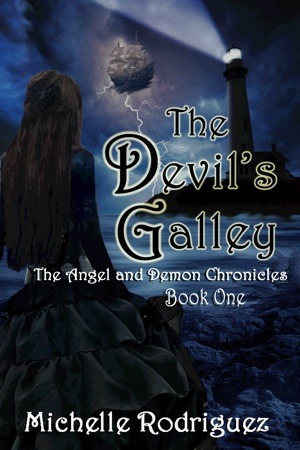 Captained by one of God’s fallen angels, the Devil’s Galley collects souls lost at sea and brings them to their eternal damnation. Since childhood, Maggie Sloane has been the only one able to see its ghostly image upon the sea, drawn to it as if it is her destiny. Haunted by visions of sin and damnation, one night, she leaps off a cliff and unwittingly ends up saved and a passenger on the ship of the damned on a journey to hell.

The fallen angel Rafe is a reaper for Satan. He cannot explain his unacceptable attraction to a mortal girl, rescuing her from treacherous death and damnation with an uncommon hope to save her soul. As they travel to hell and back with the devil after Maggie’s pure soul, Rafe must choose between his loyalty to a necessary task and the girl he was never supposed to love. Will his love be the very key to her eternal damnation?

I’ve lost count of how many times I’ve reread this one, and perhaps because I’ve read it so many times it remains a favorite. It’s become one of my go-to reads when I need a pick-me-up!

The contrast between light and dark is impossible to miss. On one hand, we have Maggie Sloane’s visions of sin. On the other, we have the lighthouse her father tends, guiding lost sailors home. Do I see a few parallels here? Throw in a few trips to Paradise, the scene of the first sin, and Hell, the final destination of the damned, and it’s pretty much covered. I’ll return to the lighthouse in a moment.

Maggie herself is incredible. Her visions leave her isolated from society and even her own father, yet her loneliness makes her accessible. She is forced to witness all the atrocities mankind is capable of in her visions, often doubting her own sanity, and while it shapes her outlook tremendously, it doesn’t define her. She is able to withstand the evil and remain pure.

Rafe is something of a tragedy in his own right. Fallen through love of one he regarded as a brother (guess who?), set to the eternal task of conveying the souls of the condemned to Hell, and stuck with another brother as evil as Rafe is, well, not. Bummer. He was cold at first, fighting his attraction to Maggie and being a stick in the mud about it, but he owned up fast enough and from then on out he was pretty awesome. If only he wasn’t so stubborn! His conversation with her about evil, free will, and mankind’s role in its own downfall, all over a game of chess, is one of my favorite scenes. I love Michelle’s heroes because there is nothing they won’t do for the women they love, but…Rafe was faced with eternity spent alone, and yet he left Maggie’s fate for her to choose, even if it broke his heart. I can’t say more and give it away, but I loved him for it!

Lucifer might be the king of Hell, but he’s not the bad guy here. That honor is reserved for Rafe’s brother Azrael (though Lucifer is pretty creepy). Sheesh! Lust, jealousy, mutiny, and a nasty fondness for stealing souls; demon indeed! I’m sure I’m missing the point, but am I the only one who liked Mortimer and Gordon? Not really sure if you’re supposed to like minions of Hell, but in my defense they were loyal enough to Rafe. And I can’t walk away without saying how much I loved Angelina!

Okay, back to the lighthouse. I love the symbolism behind it, a guiding light for the lost. It’s a literal guide for the sailors, and an emblem of a spiritual guide for wandering souls. It’s also exactly what Maggie and Rafe are for each other, and the image is a profound one.

An excellent start to what is sure to be an excellent series! No more words, just lots and lots of love!

Hello! Glad to meet you! Long story short, I've got a young heart with an old soul, I love to think about stuff, and occasionally share what I think about. Stick around, if you like!
View all posts by RisingPhoenix761 →
This entry was posted in romance and tagged angel and demon chronicles, angels and demons event, attack of the feels, favorites, michelle gliottoni rodriguez, personal collection, the devil's galley. Bookmark the permalink.