Eek! This should have been up ages ago!! 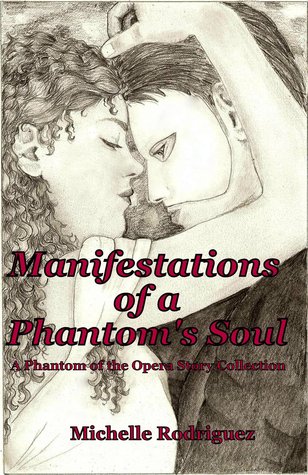 “The Phantom of the Opera” is a story about love, obsession, music, and passion. For the past few years, published author Michelle Rodriguez has been sharing her stories with the Phantom community, exploring the original characters and giving them new adventures and reasons for hope. Take a journey with her through a love story as sensual as it is eternal. “Manifestations of a Phantom’s Soul” is a collection of ten of her most loved stories online combined with two that have never been read before. Whether in the mood for something dark and passionate or something sweet and romantic, you will find a story featuring the disfigured Opera Ghost and his true love and learn that it is more than a face that defines a man.

Oh boy, am I ashamed I didn’t review this faster! The only problem is that it’s so darn hard to review story collections…especially the good ones. It’s so easy to just go on and on about them!

I was jumping for joy when I heard that the wonderfully talented Michelle Rodriguez was publishing some of her amazing Phantom stories, and to see not only several of my favorites, but new ones as well, made my day! I laughed, cried, you know, the whole nine yards. Maybe even ten, because Ms. Rodriguez knows how to get to you. It’s impossible to pick one single favorite, so I’m going to look over my notes and share a few thoughts on a few specific stories.

“To Look With Blinded Eyes” – This one has been a favorite of mine for a looong time. And it’s no wonder why, really. Take, for instance, this line: “At least her fear I could control when her heart was full of lies anyway.” That’s just heartbreaking, and that’s only the tip of the iceberg! Erik’s musings on love feel spot-on, and I go from crumbling to melting in the span of a few paragraphs. The tragedy and scope of his character are perfectly detailed in this piece, the love, the pain, the self-loathing, and the certifiable hope. Major love!

“Monsters and Masks” – I was first struck by Erik’s views of masquerades, and struck hard. It’s not a game for him; he’s like everyone else only when they pretend. What’s only imaginary for others is real for him, and that just…it hurts, man. It hurts. A maskless Erik being the most intimate possibility of all is a nice detail, because it’s true. But I also feel pity for Raoul, loving Christine as he does, yet she hides everything from everyone until she’s alone with Erik…and I love the phrase “the truth in the darkness.” Love it! Love it to pieces!

“Something Like A Promise” – This would be one of those new never-before-seen ones, and it didn’t disappoint. It’s rather decadent…bittersweet, yet with just the right amount of fluff. And hey, look at that! Philippe is here! And…wait for it…I cried! I swear, this woman turns me into the biggest darn baby!

“The Anatomy of a Kiss” – I’m just going to quote straight from my notes on this one, as my thought processes on it were vaguely amusing: Why should so much hang on a kiss? Why are they so important, and if they really are, why are they treated so lightly? Christine’s confusion in thinking she’d made a mistake in kissing Erik if she was supposed to be in love with Raoul, then that her kisses with Raoul since the opera were lies after all drove home how mixed up she is. (Recognizing Raoul’s worth, but damn it, he’s just not Erik! Sob!) I like her hurt at being upbraided in her own choice and her grudge with Erik on that issue. The walking sin comment was really striking, him hiding his identity with the mask, and her hiding hers with the wedding gown, and also a tender image of him holding her in his arms. Sigh-worthy in every aspect. Erik assuming she lied when she kissed him, but being so confused because he doesn’t know what a kiss should be, and asking her to make it a lie so he can learn…sob! Going about it as if it was all an experiment was bizarre and genius! Reject Raoul and the lies she felt for him and embrace the truth that comes with kissing Erik! See the light, Christine! See it! Clever observation in that they’ve only ever lied to each other, so how could they possibly see the truth when it’s ringing the doorbell? Short, sweet, and moving.

“Lie To Me” – Favorite! Favorite! (Well, one of them, anyway…) So damn awesome! Intense, seductive, and dark indeed, but in more ways than one. I LOVED Christine’s musing in the first few paragraphs. Has this darkness in her soul always existed, or is it of Erik’s creation? Is she evil because of it? Will the world see it on her? It sickens her, but she doesn’t care, she’s that far gone. You know, it’s rare to find a Christine so dark, yet sound so in character. And this Erik is…just…WOW! So aggressive, and I meanaggressive, yet still longing for her love and so wounded that she won’t give it. He’s not so much the Phantom here so much as a man holding on with both hands to what he has but wishing he had even more. He really does love her, but all she is willing to admit to is the desire he inspires within her. I didn’t cry; I wanted to beat my head against a wall. It has that effect on you.

“A Passionate Interlude” – Another new one, and…WOW! Good God, I wasn’t expecting THAT! Naughty! Kinky! Scandalous! Holy cow! Fluff, you say? I think NOT!…no, wait, that ending has the warm fuzzy feeling inherent to fluff…all I can say is, boy, this was FUN!

Now, about that rumor I hear about a second volume…

Hello! Glad to meet you! Long story short, I've got a young heart with an old soul, I love to think about stuff, and occasionally share what I think about. Stick around, if you like!
View all posts by RisingPhoenix761 →
This entry was posted in retellings, romance and tagged favorites, i cried, michelle gliottoni rodriguez, phantom of the opera, simply speechless. Bookmark the permalink.

1 Response to Manifestations of a Phantom’s Soul, Vol. 1 – Michelle Rodriguez