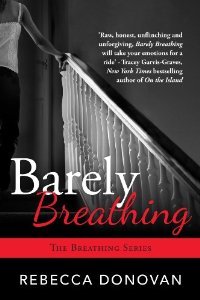 “I’ve spent most of my life trying to make it to a future that still hasn’t happened, or avoid a past that won’t let me go. I don’t remember when I’ve ever just stopped to live in the present, to hold on to the seconds I’m in.”

Emma Thomas’s struggle with an abusive home life came to a heart-pounding conclusion in the final chapters of Reason to Breathe, the first installment of The Breathing Series— Rebecca’s Donovan’s bestselling romantic-thriller (USA Today). Now her secret life has been exposed, and her tormentor can’t hurt her anymore. Yet some are still haunted by that night. The bruises may have faded, but scars and fears, remain. How will she reclaim her life when she’s barely breathing?

I had to come down a star; Rebecca Donovan’s deficiencies as a writer were a little more obvious. I had to read several passages five or six times to be absolutely sure I knew what was going on, and infer who the author of those never-ending texts was on my own, because no one was about to tell me.

Barely Breathing was nowhere as intense as Reason to Breathe, but I didn’t expect it to be. Emma is just trying to pick up the pieces after Carol’s attack, but it’s by no means easy. She’s still damaged by everything she went through, her mother has finally made a reappearance but won’t stop drinking, Mom’s boyfriend has baggage and a thing for Emma, and there’s a little tension between Emma, Evan and Sara. In short, this book deals with a lot of fallout.

At first I found it hard to believe that things like this could still be happening to Emma–how much more can we put her through, for crying out loud?–but bad stuff doesn’t pass us over just because we’ve already been through other bad stuff. The more we learn about Emma’s life, the more she makes sense. More light is shed on her relationship with her mother, we have an explanation for why she gets along so well with boyfriend Jonathan, and there is a reason for her distancing herself from her friends. I still don’t agree with all the choices she makes, but I get where she’s coming from.

I was pretty disappointed to see a love triangle emerging…it’s not a spoiler! Anyone could see it coming once we found out Jonathan was not much older than Emma! My question is, does every teen series need a love triangle? I mean, really? I could tell things would come to a head eventually and I guessed how they would end–in another cliff hanger. At least this one wasn’t quite so dire.

This one lived up to its predecessor in that, while it lacked in some aspects, it delivered plenty of heart. The emotions were just as turbulent, and the relationships just as complex. Emma and Rachel in particular were tough to watch. Rachel’s selfishness and bad habits caused most of the tension and heartache, more so as the truth about her life with Emma’s father is revealed along with Emma’s forgotten childhood. Rachel was just as bad as Carol in her way, and I hated her by the end of the book.

The key feature of this installment, to me, was catharsis. After the suspense of book one, book two dealt with the emotional hangover. Emma continued to grow in baby steps, developing her self-confidence and letting out all that anger. I feel like I’ve invested a lot in her so far and I would like to see her happy and at peace by the end of the series. I’ll just have to read and find out.

Hello! Glad to meet you! Long story short, I've got a young heart with an old soul, I love to think about stuff, and occasionally share what I think about. Stick around, if you like!
View all posts by RisingPhoenix761 →
This entry was posted in drama, romance, young adult and tagged book bingo, breathing, personal collection. Bookmark the permalink.