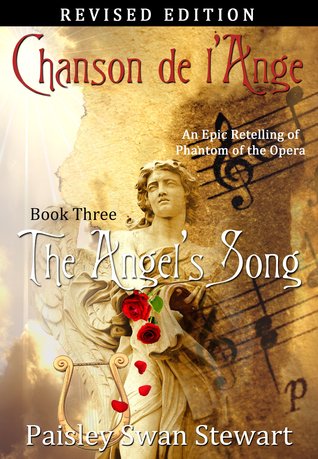 In the concluding chapters of Chanson de l’Ange, Christine confronts the ghosts of both her past and present. As she performs the starring role in her Angel’s magnificent opera, she must brave a future where all those she loves are thrust into a soul stirring crescendo that will leave readers breathless.

Oh my goodness, reviewing this without giving anything away is going to be tricky. I haven’t been this stumped since the Millennium books! I’ll try and break it down with as few spoilers as possible, but if this whole thing ends up vague and makes no sense, just know that I did my best.

Paisley opens the ball with the Erik I’ve been dying to see, obsessed and unhinged to the max. And I’ll say this: I’ve seen many retellings of the POTO climax, and this one ranks in the top five. What Paisley achieves here is equal to the Final Lair of Andrew Lloyd Webber’s musical, and I can give no higher praise than that. Love, sacrifice and redemption must always be the cornerstones to the scene, with plenty of madness and desperation thrown in, and Paisley pulled no punches. It was simply stunning.

All right, now we’re about halfway through the book, and here’s where it gets tricky, not only because of spoilers, but because it was around this point where I had trouble getting through it. Why? Two reasons. One, I was up to my eyeballs in A Song of Ice and Fire. Two, the narrative, nonstop up to that point, slowed to a crawl. The aftermath of Christine’s choice and Erik setting her free just plodded along with everyone feeling so miserable I was getting depressed just reading it. Then something I’m not at liberty to disclose happened that picked things up again, followed by a big chunk of what can only be described as fluff, and I slowed down again. Not for too long, though; the next plot twist I really didn’t see coming, and after that it all stayed steady.

Emotions certainly ran high through the course of the book, and I think Paisley did a very neat job wrapping things up. Her final scene was particularly satisfying, along with her take on Erik and Christine’s histories. Whatever I felt might have been lacking in the middle of the book, the rest more than made up for it. The beginning was cathartic and stirring, and the ending lived up to the promise made all the way back in Book One.

My closing note is on the series in general. I would have been extremely disappointed, to say the least, had I spent upwards of four years looking forward to it, only for it to let me down with bad characterizations, run-of-the-mill twists, lackluster storytelling, and just plain poor writing. I’m so glad to say Chanson de l’Ange was the opposite. The characters were living, breathing human beings and remained true to their original incarnations. There were plenty of surprises in the before and after, and even during the parts of the story the Phantom fans already know. The storytelling was compelling and lush, with dark and light mixed in. The writing was heartfelt and emotional, and I got emotional as I read. This wasn’t just a good Phantom series, but a good series, period, and I applaud Ms. Stewart and thank her for her determination to share it with the world. It was very much worth it.

Hello! Glad to meet you! Long story short, I've got a young heart with an old soul, I love to think about stuff, and occasionally share what I think about. Stick around, if you like!
View all posts by RisingPhoenix761 →
This entry was posted in retellings, romance and tagged attack of the feels, chanson de l'ange, personal collection, phantom of the opera. Bookmark the permalink.