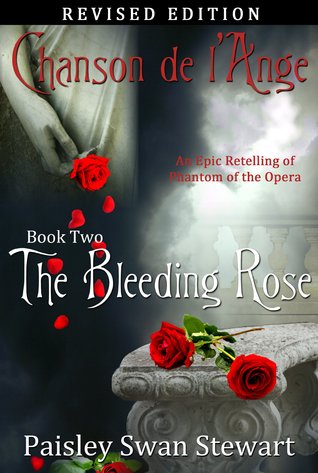 Book Two~The Bleeding Rose: continues Christine’s journey into an unorthodox attachment to her invisible teacher, and a bond of obsession and music is forged as her dark Angel methodically makes himself known. Through the illusory dreams of her adolescent desires, Christine will discover that not all angels have wings and not all devils are what they seem to be…for there are two sides to the Angel’s enchanted mirror.

Orphan In Winter was such a strong start to the Chanson series I wasn’t sure how the rest would stack up to it, but The Bleeding Rose kept things rolling. There’s a LOT more intrigue than the first book, not to mention more tension and unrest, but with Erik moving out of the shadows and finally revealing himself as a man instead of an angel there was less magic…*sniff* I missed all the magic…

That’s not to say there wasn’t a lot going on here. I spent most of the book in utter exapseration with these people. I’ve been plenty irritated with the characters when reading Leroux, but good grief! Where are all the adults?! Erik is throwing temper tantrums, Christine is being an airhead, Madame Giry is keeping secrets, and Philippe is an ignoble ass! Who is responsible for these children? The only two among them who seem to have heads on their shoulders are Meg and Raoul. Raoul, how my heart bleeds for thee! Christine doesn’t deserve someone as selfless, kind and forgiving! She’s stomping all over you, man, just ditch her fast!

Ugh, Christine! Yep, she’s a teenager all right. She’s fickle, immature, and doesn’t seem to realize how her actions are affecting the people around her. She shows occasional wisdom, and I particularly liked her composing a new aria for the Joan of Arc opera with Erik, but for crying out loud, girl, make up your mind already! Hamlet didn’t take this long to make a decision!

Christine is only one out of an entire cast that needs a stern talking-to. I’d say Erik is definitely high on that list. He’s showing more of the aggression that was missing from the first book, but it’s definitely about time he quit projecting it onto everyone else. It’s your own damn fault you’re in this mess, mister! You’re the one who thought it was such a good idea to pretend to be an angel for seven years, and now you wonder why Christine is so confused? Start taking responsibility! I defnitely see the adolescent in a grown man’s body angle that was prevalent in the ’04 movie, and it fits right in line with the way Paisley has interpreted Erik. He’s infuriating, and he’s still touching at times.

It strikes me that Erik and Christine probably don’t need to be in a relationship with anyone, let alone with each other, the way they’re acting. They have some serious growing up to do, a fact that makes me more than eager to see how this works out. That mother of a cliff hanger doesn’t hurt, either! I picked up on some Chaney insanity there! Quick! Onto the next book!

Hello! Glad to meet you! Long story short, I've got a young heart with an old soul, I love to think about stuff, and occasionally share what I think about. Stick around, if you like!
View all posts by RisingPhoenix761 →
This entry was posted in retellings, romance and tagged book bingo, chanson de l'ange, personal collection, phantom of the opera. Bookmark the permalink.