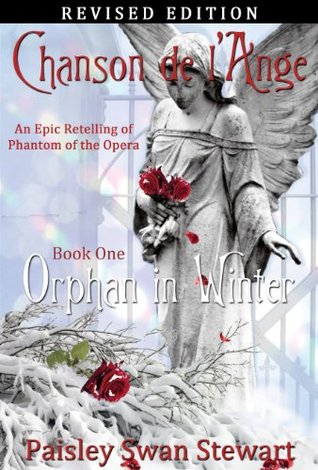 Book One~Orphan in Winter: opens with the tragic death of ten year old Christine Daae’s father, ushering in dramatic changes when she is left in the care of Madame Louise Giry. Christine makes her new home in the The Paris Opera’s conservatory where she encounters a bohemian world of singers and dancers, and where she is visited by the unseen Angel of Music.

FINALLY! Years and years of patience have been rewarded! I haven’t even been waiting as long as some readers, and certainly not as long as the author herself. Ten years of love and labor are richly paid off. Congratulations, Swannie!

Book one sets the stage for what is bound to be an amazing journey into the world of The Phantom of the Opera. One of the things I missed in Gaston Leroux’s original was more detailed characters. There is solid framework in the rather short novel (too short for my liking!), but Erik, Christine, and Raoul remain archetypes. I wanted deeper psychological profiles, and Paisley didn’t disappoint me. The focus of Orphan In Winter is the beginning of Christine’s relationship with the Angel of Music and her slow entrance into adolescence and adulthood, so I’ll start with her.

Christine is usually portrayed as an insipid, insufferable child, complete with the trademark Sarah Brightman vacant stare. Paisley brushes that aside, showing us a lost little girl grieving her father and so desperate to have him back that she clings to his final promise to send an angel to watch over her. The Angel appearing while she is still a child makes her seem less gullible and more like a kid believing in Santa…and when Santa remains a constant presence for seven years straight, it’s no wonder she still believes in him. She inspires empathy and love–I would call her one of the few Christines that have inspired such feelings apart from the original. She is fanciful, not simple, and her slow awakening to womanhood is remarkable.

Which brings me to Erik. Very well-written, capturing all the power, mystery, and tragedy of his character. He is a complex man, to say the least, and difficult to write, and it spells disaster for any writer who fails to pull him off…fortunately, Paisley did. His eroticism and masculinity were thrilling indeed, but I was even more moved by his changing feelings for Christine. He becomes her benefactor on a whim, like he has nothing better to do, then comes to care for her as a guardian until his love becomes the obsessive, consuming passion that drives him onward. A gripe I always had with the ’04 movie’s attempt at a backstory was how it contradicted what the audience already knows about Erik, and I appreciated how neatly Paisley sorted out that tangle. I would have liked to see more of his dark side, since he is by no means a selfless, benevolent, rational man, but the story has only just begun…

Raoul, the Vicomte de Chagny. I can’t clear out of here without saying something about him. Oft abused, usually the victim of horrific character assassination by extremely biased writers that refuse to give him any credit whatsoever. I was ready for all of that when he showed up in the last half of the book, but I was delighted with the accurate portrayal! A sensible, caring, impulsive young man head over heels in love with his childhood playmate. After seeing him trampled so many times I’ve taken to carrying pom poms for him, and I’m glad he wasn’t written into an abusive/alcoholic/unlovable loser we’ve seen so often (by simple virtue of his not being Erik! What gives?)

To wrap up my discourse on characterization, I applaud Paisley’s portrayal of the Girys! They were precisely what I’ve imagined, and I love that they play a key part!

The rich detail and stunning imagery are wonderful, but what I loved most about Orphan In Winter was the budding romance paired with the disturbing aspects of Erik and Christine’s relationship. It’s complex, as it should be. She has known him as an invisible Angel. He’s been a father figure to her, and so twined with the memory of her father that any idea of a romantic relationship seems, well, disturbing. Music remains the binding force between them, and Christine’s song “The Bleeding Rose” serves as a brilliant theme, tied to her past and foreshadowing the triangle to come. Ending with Christine’s debut in Faust was absolutely breathtaking, and thank God I had Book Two ready to pick right up!

Chanson de l’Ange outstrips most Phantom retellings I’ve read. There is a genuine love and understanding of the story that is too often lacking, making it all the more amazing when you find it. I put it on the shelf directly next to Gaston Leroux with select other retellings, and there it will stay. If the other books are half as good, they will have earned it!

Hello! Glad to meet you! Long story short, I've got a young heart with an old soul, I love to think about stuff, and occasionally share what I think about. Stick around, if you like!
View all posts by RisingPhoenix761 →
This entry was posted in retellings, romance and tagged chanson de l'ange, personal collection, phantom of the opera. Bookmark the permalink.